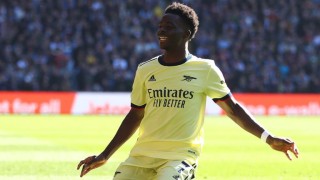 Bukayo Saka scored the decisive goal as Arsenal secure a 1-0 win over Aston Villa at the Villa Park on Saturday afternoon.

Saka fired home on the half hour mark to hand the Gunners all three points in the encounter.

The England international beat Emiliano Martinez with a shot from the edge of the box.

Arsenal withstood late pressure from the hosts to win the thrilling contest.

Mikel Arteta’s side move onto 54 points-
four clear of Manchester United in fifth place with a game still in hand over their Champions League rivals.

Villa remain ninth in the Premier League on 36 points from 29 games.