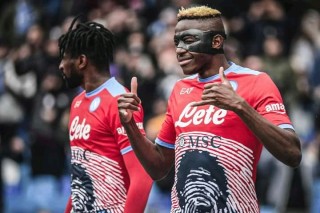 Victor Osimhen scored twice as Napoli rallied back from a goal down to beat Udinese 2-1 in their Serie A clash at the Diego Armando Maradona Stadium on Saturday.

Gerard Deulofeu gave Udinese the lead in the 22nd minute.

The visitors however rallied back after the break with Osimhen equalizing in the 51st minute after he was set up by Fabian Ruiz.

Osimhen netted the winning goal in the 63rd minute following an assist from Giovanni Di Lorenzo.

The Nigeria international has now scored 11 goals in 20 league appearances for the Partenopei this season.

The 23-year-old is now the first Nigerian to reach double figures for goals in two different seasons in Serie A.

His compatriot Isaac Success was not named in the matchday squad by Udinese.