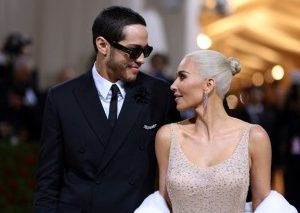 Kim Kardashian reportedly ended her nine month romance with Pete Davidson because of their age difference.

The reality star, 41, is said have found it “exhausting” having a relationship with the comedian, 28, while he was away working on the film Wizards! in Australia.

According to sources, mother-of-four Kim found the time difference, the tensions between Pete and ex-husband Kanye West and the age gap ‘”difficult”.

A source told New Magazine: “Their age difference was becoming more and more apparent. She is more mature that Pete. Kim was exhausted and with him being in Australia the time difference was very hard for them.

“Long distance relationships are difficult. The kids were very unaware of the spat their dad was having with Pete. It was unnecessary. It just brought unwanted attention and grief to the family.

“She’s their mother first and foremost so she’s prioritising them. Kanye knows there is no chance of him and Kim getting back together, he wants her to be happy.”

The insider added Pete is “absolutely gutted” by the break up.

The relationship caused tension with Kanye, who made a string of online attacks against Pete and released a song including the lyrics “God saved me from that crash, just so I can beat Pete Davidson’s a*s”.

Kim filed for divorce from the rapper in February 2021, and was declared legally single earlier in 2022.

It comes after reports Ye is taking the opportunity to get his ex back.

A source told The Sun on Sunday: “This split is only driving Kanye to push harder to win Kim back and have her call off their divorce.”