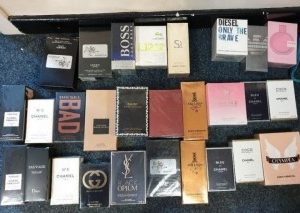 Three teenagers have been nicked following reports of a group of young men trying to get unsuspecting town-centre shoppers to fork out cash for bottles of perfume that contained wee.

The three teenagers were nicked at a railway station after bottles of the fake brands were found in a carrier bag dumped over a wall.

They were nabbed after cops had been called to complaints of men using aggressive sales tactics in Southport town centre, reports the Liverpool Echo.

The police were told that the men were trying to force shoppers to take cash out to buy the “perfume”, and two of the suspects were quickly stopped by officers.

Although they had no perfume on them, five bottles of “perfume” with wee in them were soon found in the bag dumped over the wall.

A photo shared on Facebook by the cops showed the haul, which included fake bottles of Chanel No 5, Boss by Hugo Boss, and Daisy by Marc Jacobs.

A police spokesperson said: “On July 27, police officers arrested three teenagers at Southport railway station, aged 14, 15 and 17 from Queensferry, on suspicion of fraud and fare evasion on the railway, having been found in possession of counterfeit perfumes.

“When tested, the perfumes were confirmed to be fake.

“Among the agents contained in the mixture, urine had been used as a stabilising agent. The three teenagers were released under investigation.”

The spokesperson added: “If something seems too good to be true, it probably is.”