Robbers Busted After Snatching SUV From Victim At Gunpoint. Photos

The Police in Kano have arrested four suspected armed robbers for allegedly robbing a resident of his motor vehicle. 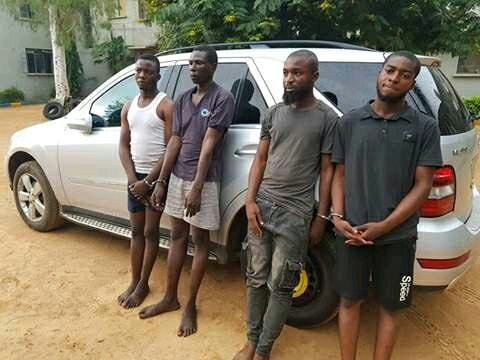 The Command’s Public Relations Officer, SP Magaji Majiya said that on Sept. 22, at about 1p.m. a gang of robbers attacked a resident of Masaka Town in Nasarawa State ,where they disposed him of valuables and a Mercedes ML350 car with registration number ABC 554AY.

He said that the arrest was made by the command’s detectives from State Anti-robbery Squad (SARS) on the same date at about 4.30 p.m. and intercepted the said vehicle along Hadeja Road, Kano with the suspects.

According to him, investigation on the case was in progress with a view to arresting the remaining accomplices and charging them to court.