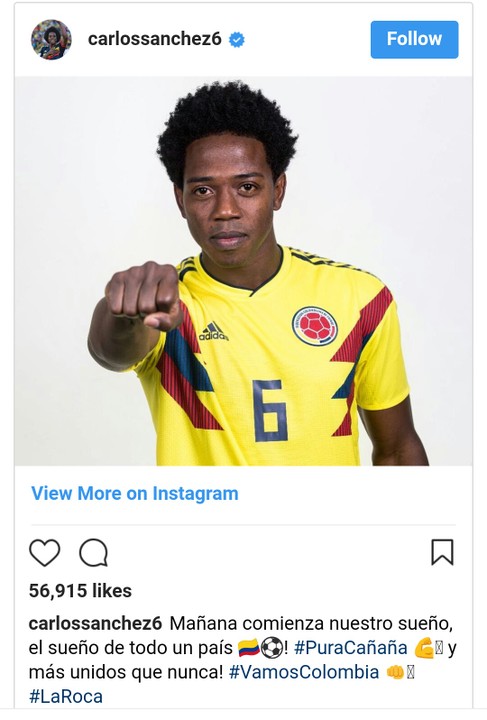 Colombian midfielder Carlos Sancez has become the first footballer to be shown the second-fastest red card in World Cup history.

The former Aston Villa player was sent off just three minutes into Colombia’s clash against Japan on Tuesday, June 19.

The 32-year old blocked a goal-bound shot from former Manchester United star, Shinji Kagawa, with his right arm inside the box leading to his punishment by referee Damir Skomina.

The marching orders to one of their key players left Colombia devastated even as they went on to lose their opening Group H match against the Asian nation.

Jose Pekerman’s side was defeated 2-1, with Kagawa opening the scoring for Japan from the penalty spot prior to Sanchez’s red card.

Juan Quintero restored parity for Colombia in the 39th minute, with Yuya Osako making it 2-1 for Japan in the 73rd minute.

Despite Japan’s stunning win against one of the strongest footballing nation, Sanchez’s red card took centre stage of the tie’s debate.

The red card is second after Jose Batista’s in 1986 World Cup while in action for Uruguay.

The defender was red-carded after just 54 seconds during his country’s group stage clash against Scotland after a horrible attack on Gordon Strachan.

Be that as it may, Sanchez’s red is fascinatingly one of the longest a World Cup tournament has gone without one in a single campaign.
Senegal defeated Poland in the other Group H match by 2-1.

Thiago Cionek deflected home an Idrissa Gueye’s shot to put the West Africans ahead in the first half while Mbaye Niang added the second after he capitalized on a defensive blunder.

Grzegorz Krychowiak pulled one back for the Robert Lewandowski’s captained side but it was not enough as Senegal held on for the victory.