Striker That Tuchel Wants Chelsea To Sign Instead Of Ronaldo Revealed 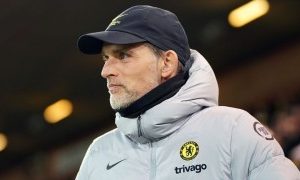 Tuchel wants the Blues to enter the running should Lewandowski show any willingness to move to England.

Bayern have so far rejected multiple offers for the 34-year-old from Barcelona, who are Lewandowski’s preferred destination.

But Tuchel is monitoring the Poland striker’s situation and will urge Chelsea to pounce if a deal is feasible.

Tuchel is in the market for a centre forward, after Romelu Lukaku completed a one-year loan deal to Inter Milan.

Although Chelsea owner, Todd Boehly, is interested in a move for Ronaldo, Tuchel is pressing ahead in other ways to strengthen his attack.

The Stamford Bridge club has made a £60m offer for Leeds United winger Raphinha while also remaining in negotiations with Manchester City to sign forward Raheem Sterling, a deal they are increasingly hopeful of completing.