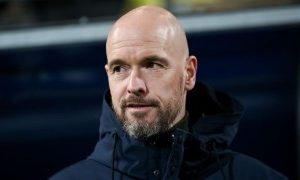 New Manchester United manager, Erik ten Hag, has detailed what he expects from Cristiano Ronaldo if he ends up staying at the club.

This is according to Sky Sports reporter, Kaveh Solhekol.

Ronaldo is desperate to leave Old Trafford this summer, after the club failed to qualify for the Champions League.

Chelsea, Bayern Munich and Napoli have all been linked with the 37-year-old.

Ronaldo missed a second day of pre-season training today with family reasons again cited as to why.

United are however in the dark as to if Ronaldo will return to training before they fly out for their pre-season tour on Friday, July 8.

But Solhekol outlined the Red Devils’ expectation if the Portugal captain eventually fails to get his move.

“If Ronaldo ends up staying at United, he will be expected to work as hard as any other player,” said Solhekol.

“If he leaves, it would suit all parties if the deal was done as quickly as possible. United would let him leave if they receive an offer which suits all parties.

“Ten Hag doesn’t want Ronaldo’s future to be the focus of next season. United cannot afford to have the Ronaldo show distracting them during the rebuild which has just started. It would have suited United if the Ronaldo issue had already been resolved.

“United cannot offer Ronaldo what he wants most next season, which is Champions League football. Any other 37-year-old may be happy to be a substitute and come on for the last 20 minutes of games. But that is obviously not the case with Ronaldo.

“United players will be running harder, faster and farther than last season.”