The criminals were said to have broken into the woman’s house last Thursday April 14. 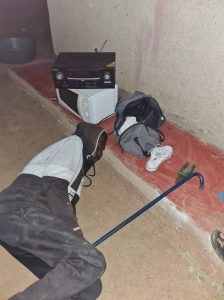 Two thieves have landed in trouble after mysteriously dozing off at a woman’s house.

It was gathered that the thieves had broken into an elderly woman’s house in Hammanskraal, Pretoria, South Africa before stealing items from her.

The sad incident happened last Thursday April 14. The criminals had stolen a plasma television, a microwave, shoes, and many other things out of the house.

But on getting to the door that leads out of the compound, they mysteriously dozed off.