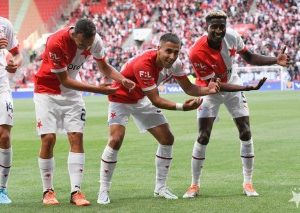 Peter Olayinka celebrated the birth of his child by netting two goals in Slavia Prague’s 7-0 home win against St. Joseph’s, in the second round of the UEFA Europa Conference League on Thursday.

Olayinka scored Slavia Prague’s first and third goals as the Czech Republic club advanced into the third round 11-0 on aggregate.

Olayinka opened the scoring in the 18th minute with a header off a cross before making it 3-0 with another header on 28 minutes.

Slavia Prague will now take on Greek giants Panathinaikos in the third round.

Panathinaikos will be guests to Slavia Prague for the first leg on Thursday, 3 August while the return leg leg is billed for Thursday, 11 August.

He was part of the Super Eagles squad that featured at the 2021 Africa Cup of Nations in Cameroon.