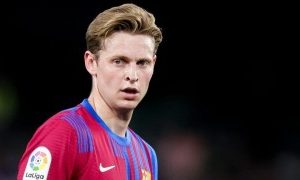 Frenkie de Jong is likely to join Manchester United on the very last day of the summer transfer window.

Manchester United boss, Erik ten Hag has prioritised the signing of De Jong for the club this summer.

The 25-year-old has been at the centre of the summer’s biggest transfer saga, but the Red Devils have refused to back out of the deal.

There has also been a dispute between the player and Barcelona over his unpaid wages and this is forming a major road block in a potential deal.

However, despite owing the midfielder and other players at the club, Barcelona have embarked on blockbuster summer signings, bringing in the likes of Raphinha from Leeds and Jules Kounde from Sevilla, with the La Liga giant bringing out in excess of £100million on new recruits.

Manchester United and Barcelona had agreed deal for the player but the midfielder has refused to move despite manager, Xavi Hernandez suggesting that the club need to sell him to meet financial fair play and avoid sanction from LaLiga.

“…Frenkie de Jong has never done anything bad or said anything bad, he’s been an absolute pro. In this case the player is right to stand up for his rights,” he told talkSPORT.

“Of course the question now is about who will bend, Frenkie or Barcelona?”

The Catalan giants must sell player in order to register the new ones with the league management and have decided to get rid of De Jong’s wages from the wage bill.

“Frenkie says he’s not going until he’s had his wages and so it will probably go a long way into the transfer window and at the last minute there will be a solution,” he added.