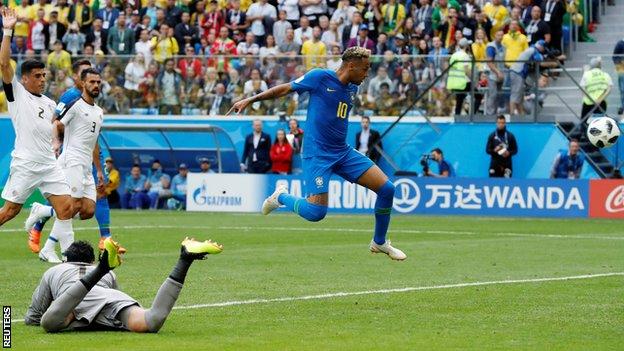 Brazil coach Tite says the nation should not “place the whole responsibility” on Neymar’s shoulders.

The world’s most expensive player, 26, has recently returned from three months out with a foot injury.

And the Paris St-Germain forward has been criticised for his performances in Brazil’s first two World Cup games.

“He is a gifted player, but is outside his normal standards – or he wouldn’t be playing like this,” said Tite. “He is only in the recovery stage.”

After a disappointing World Cup as hosts in 2014, Brazil were held to a 1-1 draw by Switzerland in their opening game in Russia.

They then needed two injury-time goals to beat Costa Rica, with the second scored by Neymar, who was also awarded a penalty only for the decision to be reversed via VAR.

Brazil face Serbia on Wednesday (19:00 BST) needing just a point to guarantee a place in the last 16.

“This is an evolution, if you look at the heat map of his last two games, it has increased considerably,” Tite said of Neymar.

“Maybe he will be at the top of his game in the next match. We shouldn’t place the whole responsibility on his shoulders.”

Neymar was expected to lead Brazil to a sixth World Cup on home soil in 2014 but was injured in the quarter-finals before the hosts were beaten 7-1 in the semi-finals by Germany.

The ex-Barcelona forward wept on the field after the Costa Rica win, which put Brazil joint-top of Group E with Switzerland on four points.

“There are moments when you have to have a cool head and to keep a standard,” said Tite.

“We are aware of the emotions and the pressure, we have to be able to assess heart, head and reasoning. But emotion isn’t always in sync with imbalance – not at all.”

Serbia are third in Group E on three points so a win over Brazil would send them into the last 16. They can also qualify with a draw and a Switzerland loss by more than one goal to Costa Rica in the group’s other game.