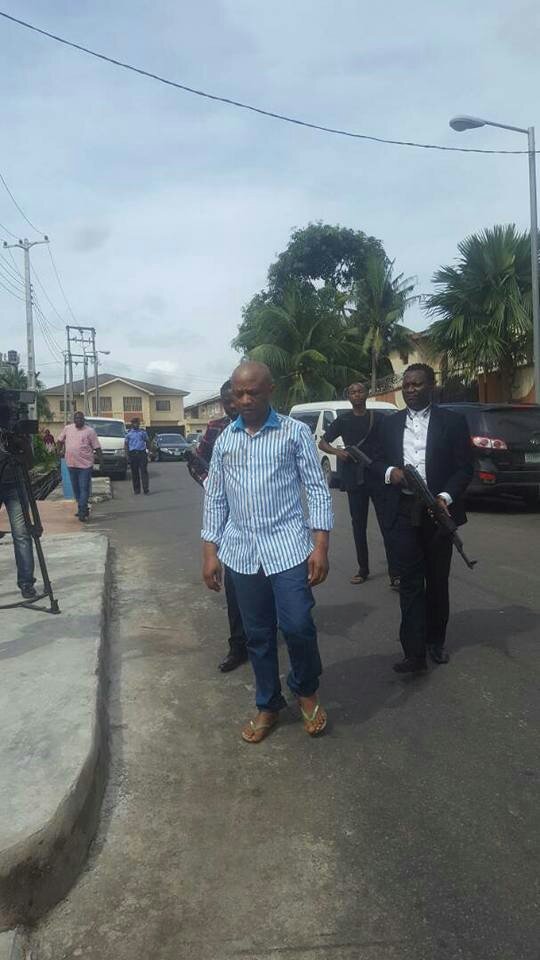 Mr Edwin Udoji, a witness in the on-going trial of billionaire kidnapper Chukwudumeme Onwuamadike,alias Evans, yesterday told a Lagos High Court sitting in Igbosere how he raised $1million ransom for the freedom of his brother  and businessman, Mr James Udoji, The Nation reports.

Led in evidence by the Lagos State Director of Public Prosecutions, Ms Titilayo Shitta-Bey, Edwin, who is elder brother to the victim, told Justice Adedayo Akintoye that he coordinated how the money was raised.

Udoji was kidnapped on his way home from work in the evening of September 7, 20-15 when he was allegedly kidnapped by Evan and his men.

He  had on Friday narrated to the court how he was abducted on 7th Avenue, Festac Town, Lagos by a gang of armed gunmen, who rode in a Lexus 470 Sport Utility Vehicle, and fired several shots at his Hilux van, before dragging him out and whisking him off.

Edwin said the kidnappers told him specifically that they wanted the ransom in $100 bills and that the bills must be new and genuine.

He told the court that the kidnappers warned him against bringing fake bills and that if he did, he would pay a fine of $10,000 for every fake $100 bill.

Edwin, who is fourth prosecution witness, told the court that about one hour after his younger brother was kidnapped, their elder brother, Sir Uche Udoji, telephoned him to break the news to him.

He said they immediately drove to the police station in Festac where they lodged a complaint at about 7pm.

He said they found on the premises of the police station, the Hilux van, which their brother and his driver rode in, noting that the widescreen was shattered, while its body was riddled with bullets.

Edwin said he later received a call from a hidden number, with the caller telling him to hold on for his brother but before the brother could talk the line went off.

He said the caller phoned him about one hour later and he spoke with his brother who cried and begged him to raise the ransom.

“He told me that there was a bullet inside his body and that if I did not act fast, he would die,”the witness said.

He said to raise the money he called all the distributors doing business with the victim’s factory, which produces wires and cables, and begged them to help out.

He said the caller using a hidden line kept calling him to put pressure on him to raise   the money fast.

“At a point, they told my brother that your brother is not making enough effort.”

He said at a point, the unknown caller even proposed to swap him with his kidnapped brother so that the businessman could go and raise the ransom faster.

Under cross-examination by Evans’ lawyer, Mr Chino Obiagwu, Edwin said he also reported the case to the Department of State Services, where an operative advised him to keep the call log.

He, however, said he never recorded the voice of the caller and did not submit the call log to the police for investigation.

The driver, who testified as the third witness, pulled off his top to show the judge the scar of the bullet wound he sustained in the attack.

Further proceedings were adjourned till October 4.