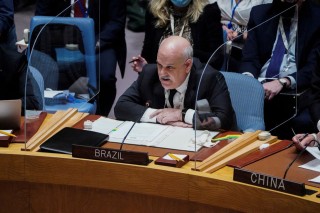 Brazil’s ambassador to the United Nations, Ronaldo Costa Filho, reaffirmed on Wednesday the country’s position in favor of an immediate ceasefire in Ukraine, but said the indiscriminate application of sanctions on Russia does not lead to the reconstruction of dialogue.

He made his statement minutes after the UN General Assembly voted to reprimand Russia for invading Ukraine and demanded that Moscow stop fighting and withdraw its military forces.

“The resolution cannot be seen as something that allows the indiscriminate application of sanctions. These initiatives do not lead to the reconstruction of a diplomatic dialogue and it brings consequences that go beyond the current situation,” he said.

On Tuesday, President Jair Bolsonaro, who visited Russian President Vladimir Putin in Moscow ahead of the invasion, said Brazil would remain neutral in the conflict, citing Russian fertilizers which are crucial for the country’s giant agribusiness sector.