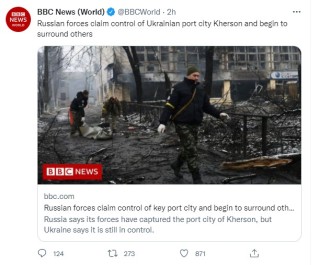 The Russian army has claimed it has taken control of the strategically important city of Kherson in southern Ukraine as Moscow’s invasion of the country entered its seventh day.

“The Russian divisions of the armed forces have taken the regional centre of Kherson under full control,” defence ministry spokesman Igor Konashenkov said in televised remarks on Wednesday.

He claimed that public services and transport were operating as usual. “The city is not experiencing shortages of food and essential goods,” he said.

He added that talks were under way between the Russian army and local authorities on maintaining order, protecting the population and keeping public services functioning.

‘We are still Ukraine’

Kherson’s Mayor Igor Nikolayev, however, said in a post on Facebook: “We are still Ukraine. Still firm.”

Apparently contradicting the Russian army’s claims, he said he needed to find a way to “collect the [bodies of the] dead” and “restore electricity, gas, water and heating where they are damaged”.

“But I warn you right away: To complete these tasks today means to perform a miracle,” he added.

Al Jazeera’s Andrew Simmons, reporting from the city of Lviv in western Ukraine, said there are reports of “Russian soldiers being seen on the streets of Kherson”.

“This is a strategic city because it links the [Russia] annexed Crimean Peninsula to the mainland of Ukraine,” Simmons said.

“This is a much bigger city … on the Sea of Azov,” Simmons said. “There is a colossal fight going on there.”

The UK’s Defence Ministry said it had seen an increase in Russian air and artillery attacks on populated urban areas over the past two days. It also said Kharkiv and Mariupol were encircled by Russian forces and that troops had reportedly moved into the centre of Kherson.

Al Jazeera’s Jonah Hull, also reporting from Lviv, said there appears to be a “pattern of Russian attacks aimed at depriving Ukraine of access to its Black Sea coast”.

“The Russians are said to be in control of Kherson and are also encircling Mariupol, a much bigger port city down on the Black Sea coast between Crimea and the breakaway regions,” he said, citing the self-proclaimed Donetsk People’s Republic (DPR) and Luhansk People’s Republic (LPR) in eastern Ukraine.

All in all, the Russian military damaged more than 1,500 military facilities in Ukraine, Konashenkov, the defence ministry spokesman, said on Wednesday, adding that 58 planes, 46 drones and 472 tanks and other armoured vehicles had been destroyed.

Meanwhile, Ukraine’s President Volodymyr Zelenskyy on Wednesday accused Russia of seeking to “erase” Ukrainians, their country and their history.

In a video address posted on Facebook, Zelenskyy said the West’s response was not enough, calling for more international support, including backing Ukraine’s bid to join the European Union.

The Ukrainian leader said Tuesday’s shelling on the site of the Babi Yar Holocaust memorial, adjacent to the TV tower in Kyiv, proves that “for many people in Russia our Kyiv is completely foreign.

“They know nothing about our capital. About our history. But they have an order to erase our history. Erase our country. Erase us all,” he said.

Zelenskyy also claimed nearly 6,000 Russian soldiers have been killed since the invasion began last Thursday. Russia has not released overall casualty numbers and the figure could not be confirmed.

More than 650,000 people have fled Ukraine to neighbouring EU member states since Russia’s military invasion of Ukraine, the European Commission said on Wednesday.